EDGE Services is the brainchild of Kate Lovett.

Kate has a clinical background in nursing specifically in adult orthopaedics and rehabilitation. Having moved from a clinical setting to a post as a Senior Lecturer at the University of Hertfordshire – School of Health and Human Sciences, she became aware that many local care organisations were crying out for manual handling training which the University did not have the capacity to provide.

A year or two later, having relocated to the picturesque City of York, Kate set up as a sole trader to provide the training which so many healthcare organisations were struggling to find.

Demand was such that she soon found herself travelling further and further afield; one by one additional trainers joined; and, before long, now incorporated, the company has established itself at the forefront of health and safety training across the UK healthcare and special needs educations sectors. 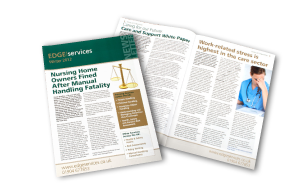